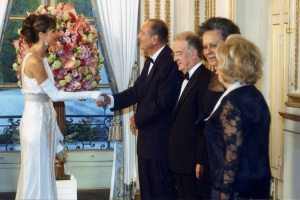 You were invited to the Elysee Palace in France this week by the President of the Republic, Jacques Chirac, tell us about this invitation ...

I was in North America when I received the invitation from Mr Jacques Chirac, the President of France, who invited me to the Elysee Palace for a dinner in honour of the President of Portugal, Jorge Sampaio and I was very honoured by that. What a wonderful way to arrive back in Europe.

So in a way this shows that you´ve really been adopted by France and Monaco?

Yes... I guess so. The French has always extended a great friendship to me and I think this invitation is very much a sing that those feelings are still there. I have a very long Portuguese lineage, and relations between France and Portugal go back a long way, as underlined by Mr Chirac during his speech, and Mr Sampaio echoed the same thoughts. They both had the same dialogue in the sense of maintaining the wonderful friendship between this countries and constantly working together towards a Stronger Europe.

You come from an old Lusitanian family - one of the oldest aristocratic families in Portugal. Tell us the story of how your ancestors were granted their coat of arms by the king...

Our roots go back 29 generations on my fathers side. Nuno Alves Pereira, one of my ancestors, has the coat of arms, the Cross of Aviz bestowed on him by the king for leading Portugal to victory against Spain at the famous battle of Algeborota.

It´s an interesting time with the European constitution being played out. What are your thoughts about that?

I think the idea of a United Europe is a very positive thing. We need to have a strong union.

What did you wear for your dinner with the presidents?

Olivier Teskins from the House of Rochas dressed me. It was a very beautiful pale blue-lavender colour silk organza tuilled dress with long ice pale blue kidskin gloves. There was a little train in the back and the bottom was in a mohair trim matching the dress. I was wearing antique Boucheron earrings.

How would you describe the evening?

Absolutely magic... enchanting, from the moment you step on the red carpet with the Presidential guards, on through the incredible apartments of the Elysee Palace dressed with exquisite flowers and candles... all incredibly elegant. What a beautiful palace they have in France!

What did you speak about with the President?

I expressed that I was very honoured and happy by this invitation, and he said he was very happy that I´d come. He ha a great sense of humor. We´d a laugh and he´s very charming.

You´ve been involved for many years in humanitarian activities. Did you discuss this with the ministers present?

Yes. They were aware of the work I´ve done with UNICEF and we discussed how we could join forces on a project to help the children.

You´re a resident of the Principality of Monaco and a friend of the Princely Family . What are your feelings about the passing of Prince Rainier III?

I am very saddened by the loss of Prince Rainier. He was a great man, and a tower of strength, and he´ll be greatly missed.