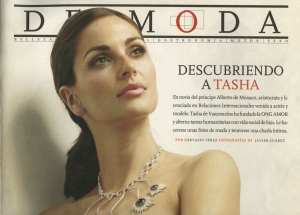 I met Tasha de Vasconcelos on a two day lightning trip to Moscow at the start of July. During this time we had several brief encounters and one five hour meeting. Her plane from Paris arrived in the late afternoon. That evening she had to attend the presentation of one of three jewellers from Spanish firm Carrera y Carrera in the Russian capital. The following day she had two sessions with Harper's Bazaar and Vogue and the next a session with MAGAZINE, along with the awards ceremony at the closure of the Moscow Film Festival. This is image work. Her job.

Weeks earlier, in Madrid, I had asked directors from Carrera y Carrera, sponsoring the festival, whether they would allow me to do a story on the work of this celebrity, along with a fashion shoot featuring their jewellery, given that it was the first time in their 120-year history that the company had produced a collection of high class jewellery and also the first time a Spanish brand competed in this sector of ultimate luxury. Carrera y Carrera is one of only a very few international jewellers that have their own workshop; Harry Winston, JAR, Stern and Van Cleef & Arpels are others. A film festival is the perfect place to display their wares. Whether at Cannes (sponsored by Chopard), Venecia (sponsored by Bulgari) or the Oscars, the stars always flaunt extravagant jewellery at such events.

Carrera y Carrera arranged the session and introduced us to Sandra García-Sanjuán, Tasha's agent in Spain and accompanying her on the trip. We stayed at the same high-security hotel near the Kremlin, an armoured Hyatt resembling the embassy buildings during the times of terrorism. Hotel clients include Arab sheikhs with their entourages, business men, business women and rich tourists. It has a tacky, Oklahoma shopping mall feel about it, on its large, 10-floor steel and glass site. There are security guards on every floor, cameras everywhere and the lifts are operated by the room card. Introductions were brief as Tasha had not much time to get herself ready and go to the jewellers, yet we got along immediately. She has been trained to be quick and knows how to maintain a certain distance while maintaining an air of confidence. There were already several famous Russian actors and actresses, designers, clients and journalists at the festival when she arrived. In a short black dress, she attended to the television crews and reporters and returned to the hotel an hour and a half later. It was 10.30 pm and she was tired. She was going to have dinner in her room and we said goodbye until the next morning.

I visited the Harper Bazaar team during a photo shoot with Tasha. In the hotel bar at lunch she ordered a salad and a glass of champagne. She was direct, "You will probably find it contradictory that I do these things but am also interested in humanitarian work. Many people don't understand, they find it hard to believe. They appear to be incompatible life principles. The truth is that I consider them to be compatible". I told her I agreed that purity lies in the mixture. She smiled, "Coexistence cannot exist without respect. It is a greater determining factor than love."

Perfect Education. Tasha de Vasconcelos da Mota e Cunha was born in Mozambique to a Portuguese father and an English mother. Her father is from an aristocratic family with origins in 13th century Portugal. She grew up in Mozambique and her structured life plan would have directed her towards university, a big wedding and a discreet life. She registered at the University of British Columbia in Canada and the plan continued smoothly until she began to nip off to New York to do modelling work. She did her first Vogue cover with Steven Meisel. Many more followed, along with campaigns for Dior, Calvin Klein, Balenciaga and others. She graduated and studied International Strategy in Paris and Acting in London, continuing to model and beginning to do cinema, theatre and television. In addition to these numerous activities considered inappropriate for a woman of her standing, Tasha's relationship with Prince Albert of Monaco began to feed the gossip press. To top it all, the relationship failed. Her family was unsupportive and she does not speak about politics or other thorny issues with her sister, Pamela, who is married to a well known diplomat in Washington. They are unspoken issues that keep the relationship alive. "I would give my life for her. She is a blood link"

I didn't ask her about her relationship with Prince Albert. She didn't mind, but was relieved, not because she wanted to avoid an issue of which she has made the most on other occasions, but simply because she gets bored repeating the same words: "He is a real gentleman", "I am pleased that he is happy". I told her I have never really been interested in Prince Albert and that his strident attitude in Singapore harmed Madrid's candidature for the 2012 Olympic Games. "Well, I think Spain is doing very well. It is a country with an important history, which it demonstrates in the power it is gaining in Europe. Other countries get nervous when Spain takes the initiative. They hate to lose influence". Sandra García-Sanjuán wanted a word: Tasha had to be in bed early in order to be ready for the next morning. We said goodbye until the following day. The photo session started at 10 am and lasted over than five hours. The ceiling of the room was a large glass skylight and, much to the photographer's desperation, the light that Moscow morning changed every two seconds. The early morning sky was cloudy, but the wind swept the fast moving clouds and we switched continuously from winter shadows to blinding rays of sunlight. Tasha didn't mind skipping lunch, preferring not to work under pressure and to appear beautiful. Despite her confidence in her 1.79 m body, she was rather disconcerted that we had tied her hair back. She is proud of her long hair and feels naked without it. We said that celebrities overuse long hair and she said that she ties it back when she travels on humanitarian missions to Africa. This is a small gesture of humility, a momentary resignation of the ostentatious striving for long hair in the rich world. Tasha collaborates with UNICEF, UNESCO and the Nelson Mandela Children's Foundation. She changed in the bathroom and asked us to put on music and bring her a glass of white wine. She insisted on letting her hair down, but we were reluctant. She is liked for her similarity to Queen Rania of Jordan. Two days ago she was photographed with her long hair blowing in the wind for the front cover of two new franchise editorials in the Middle East. It was after 3.30 when the photographer took the final shot. She ordered a salad and a sandwich while a car waited to take her to the festival.

Hundreds of people screamed and clapped when Gerard Depardieu walked down the blue carpet to the Octobre Theatre (celebrity carpets are not red in Moscow). The routine was repeated several other actresses and local directors and there was a burst of applause and shouts when a doorman opened the door of the Mercedes and Tasha appeared with her long silky hair, wearing a long dress and a necklace worth over €150,000 Euros. She is very popular there. The Russian interpreter told me that Muscovites love anything connected to Monaco and its people. Muscovites love excess and opulence, as is is evident all over the city. Like many other cities, Moscow is losing part of its history with the arrival of an invasive species: modernity. Although none of our faces were familiar to them, behind us people were applauding us as if we were foreign celebrities. Due to the strange sensation of parading down a 100-metre long blue carpet surrounded by crowds of people we were all wearing stupid fixed smiles.

Tasha was met by film director Niñita Mikhalkov. The festival wanted to highlight the Moscow scene, but the contrasts highlight its conflicts. The October Theatre looks like a run-down Las Vegas cinema and the event is broadcast live, nationwide in a mixed atmosphere of caramel popcorn and blackened carpet. As in any festival, the film industry world is egocentric and self-appraising. On stage each person fulfils his or her role. Tasha does the same, and does it well.

A "Schizophrenic" life. When the ceremony was over the organisers reminded Tasha that the gala dinner started in three hours time. She decided not to go as she had another engagement. The organisers were surprised. I heard that Daryl Hannah attended on a previous occasion and was charming. No, she would not go. These dinners are all the same and, as Paulo Coelho wrote in The Zahir, seen one, seen them all. We returned to the hotel around 7.30. Tasha didn't change for her later appointment, asking instead for a glass of champagne and talking about how schizophrenic her life is. "I don't consider what I am doing is bad. I need both things. When people ask why I do humanitarian work or insinuate that I do it for fame I only tell them that I was born in Mozambique. I know what goes on in the world and I need to contribute towards improving many things". I said we were at a festival in Moscow, staying in an American hotel, drinking French champagne, that she was wearing Spanish jewellery and that it got dark at 11 in the evening. I repeated what I had said earlier about purity being in the mixture of metaphysical and physical. She smiled. In Germany next November UNESCO is presenting her with an award for her AMOR (Aids Mozambique Orphanage Rescue) foundation. 48 hours had passed and she had to go. We said goodbye.